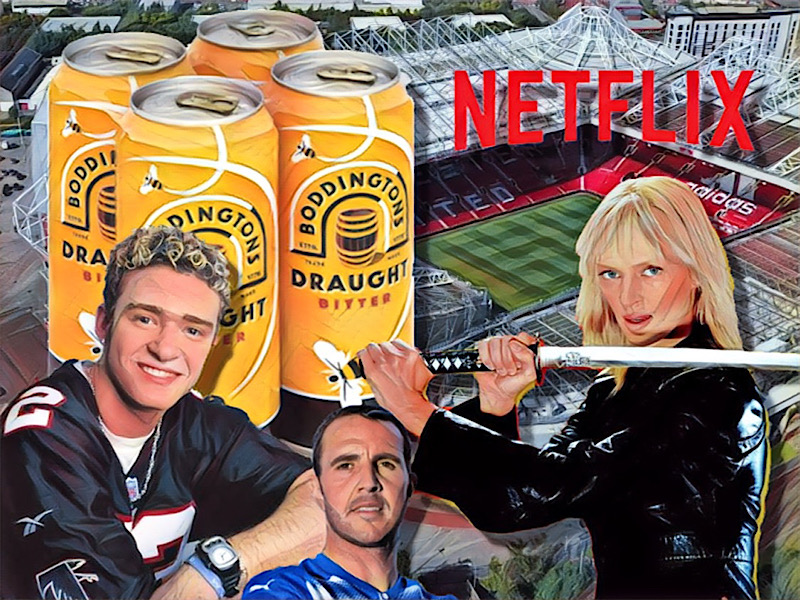 This is episode four of a wider series. To start at episode one, click here.

“You don’t have to say, what you did. I already know, I found out from him. Now there’s just no chance, with you and me, there’ll never be. Don’t it make you sad about it?“

Manchester United manager George Bond is woken suddenly in the night by the sound of smashing glass and staggering, heavy footsteps.

He springs out of bed and grabs his ‘Kill Bill volume 1’ official replica (yet genuinely sharp) katana from it’s stand, almost accidentally stepping on the DVD case of Lock, Stock and Two Smoking Barrels with bare feet as he creeps out of his bedroom door.

The noise is coming from just outside the front door at the bottom of the stairs. What’s going on?!

The door opens and Bond’s blood pressure immediately drops back to a normal level when he realises who it is.

“I’m sorry gaffer.” The 22-year old defender’s words fall out of his mouth like the remnants of his last can of Boddington’s. “I had a terrible dream.”

George Bond is furious, but too intrigued to explode. “Breathe son, what’s wrong?”

“I had this horrible nightmare that I ended up in the North East at a club that just kept getting relegated. Also, folk kept showing up and poking cameras in our faces for some documentary thing. I was so upset after our night out, I even forced Gibbo to drive me here, look! He’s worried too. Don’t let it happen to us, gaffer!”

The manager’s mood changes and the door slams shut. “I’ll see you in the morning at training, gents. Get some f****** sleep.”

Things have started alright here in Manchester for Bond. Drunken night visits aside. United’s solid, yet unspectacular start to the season continues, and as of Halloween 2003, they sit second in the Premier League to an oddly overperforming Manchester City side. A side led by Kevin Keegan and featuring Trevor Sinclair in incredible form, alongside Eyal Berkovic, Claudio Reyna and former Liverpool pals Steve McManaman and Robbie Fowler.

The Champions League on the other hand has been a tougher endeavour. A surprising Old Trafford defeat to Deportivo La Coruna courtesy of an emphatic Diego Tristan strike, coupled with a disappointing 0-0 draw away at AEK Athens has left United third in the group, with all still to play for.

After being beaten 1-0 away at Charlton with Matt Holland in incredible form, United took on their most bitter rivals on their patch, Liverpool at Anfield. An incredible array of talent lined up on both sides. Despite a first half brace from Dutch Fergie-botherer Ruud van Nistelrooy, United threw it away in the second half to draw 2-2.

George Bond has already parted with some £47.5million of United’s money on the quintet of Carvalho, Smith, Maldini, Lucio and Kaladze.

He has his eye on one or two others, however.

Juan Roman Riquelme is reportedly one of Bond’s favourite players. Despite the Dartford Hardman‘s tough exterior, he does love an elegant number 10, and the nonchalant brilliance of Riquelme absolutely embodies it, arguably more so than any other player in world football. There’s a challenge, however. Although Rijkaard is as keen to see the back of the enigmatic playmaker as much as he was Italian legend Paolo Maldini, he is on loan at Villarreal until the summer of 2005. That’s 18 months away. Any deal for the Argentine would have to wait until then.

It’s the last day of October, and the ghouls and ghosts who have reared their head this season so far are having their usual party the night before All Saints’ Day (no, not the band or the ripped jean-makers).

Talking about ghouls and saints, permanently angry, yet hilarious miniature Scotsman Gordon Strachan won manager of the month for driving his Southampton team into the top half of the table.

It’s the Manchester United Halloween 2003 party (writer’s note – is that a thing?) and Phil Neville (yet to make an appearance this season) is doing everyone’s head in, even his own brother’s, with terrible puns, like calling the buffet food “ghoulicious,” while dressed as a vampire.

Paul Scholes and Paolo Maldini are disgusted (and certainly not in costumes), while Cristiano Ronaldo is in his socks, doing keepy-ups in the kitchen with a golf ball, lipsyncing to Justin Timberlake. The charistmatic youngster is trying to impress Eric Djemba-Djemba’s plus-one, who sips a gin and tonic, not really paying attention. No one has actually seen the Cameroonian outside of his six minutes of combined playing time across two late sub appearances this season, so it’s odd that his girlfriend is here.

Rumour has it he and Kleberson play a lot of Championship Manager together, just to see what it would be like if either of them were to actually start a game.

The Invisibles are starting to come out of the shadow a little bit, but Bond and his boys have a long way to go.